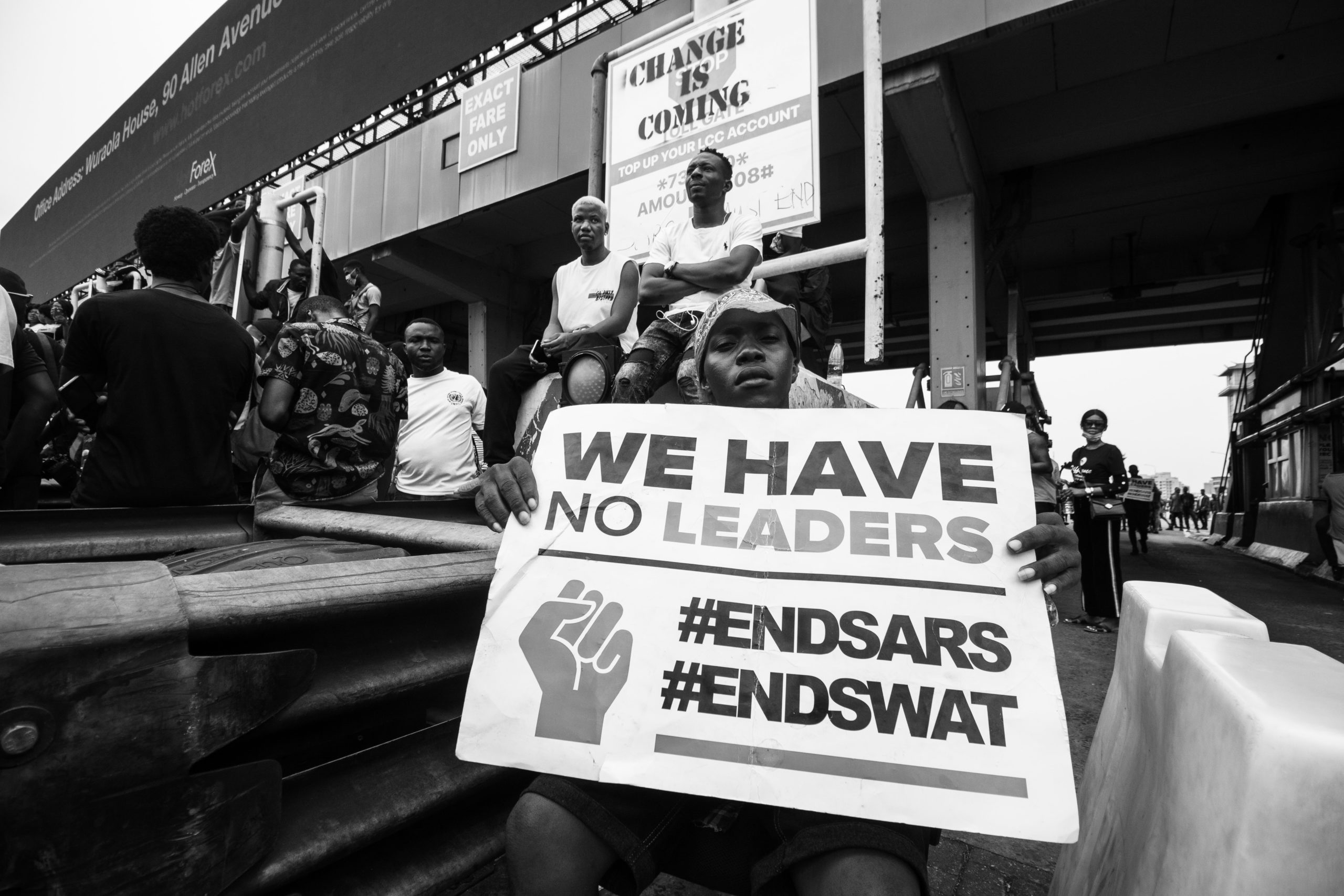 I remember this statement was frequently thrown about during the protests. It was essentially a means to keep the steam of the protest on and to prevent the politicians in charge of the country from isolating a group of people with the intention to either bribe them over or intimidate them as is their mode of operation. Looking at the caption again, it comes off as a double entendre to me. The second meaning is in fact stating that the country actually has no leaders.

A leader is someone who has the interests of the people being led at heart and works towards a common goal with them. The politicians who are at the helm of affairs in this country are not fit to be called leaders. A more befitting description would be plunderers. They are essentially robbing us of everything including our lives as though we are in wartime.

The politicians we have in charge of the resources of the country are not interested in bettering the lives of the people they administer. I cant even say electorates, because we didnt elect these people, they imposed themselves on us by voter intimidation and fraud.

I am exhausted thinking about the way forward from the protests against police brutality and impunity in our government. How do we get out of this situation? Just today, the chief of police IGP Adamu released a notice that essentially commended the police officers for exemplary conduct (lmao) during the EndSARS protest, ending the communique with a thinly veiled permit informing the police officers to use lethal force on its citizens.

This country really tires me. I really had some faith during the EndSARS protests, that finally we would have some respite from the pillaging we were experiencing. Alas, I was wrong. The protests and the aftermath has further opened everyone’s eye to a lot of the atrocities perpetrated by the Nigerian government against its citizens.

Just last week, Modupe Odele, a popular lawyer on Twitter who provided legal services to help free illegally detained EndSARS protesters, had her international passport seized at the airport by the immigration officials while she tried to board a flight out of the country. She was not told what her offence was or who exactly gave the order to seize the passport. As at the time of writing this article, her passport is yet to be returned.

The immigration authorities later came to say that the passport was not seized in relation to the EndSARS protest, but as a part of an enforcement of a routine restriction, which you and I know makes absolutely no sense.

The most recent event that has unfolded as a part of the aftermath of the protests is the CBN Governor getting a court injunction to freeze the accounts of popular influencers, who they believed sponsored the protests. This included the account of Rinu, a lady who sits on the Lagos judiciary panel. The panel was set up to address the issues arising from the protests and to hear out the grievances of numerous Lagosians who had suffered at the hands of the very dreaded police unit. This singular act goes to show that the government had no good intentions with the panel in the first place and only wanted to temporarily stem the heat emanating from the protests and the world at large.

I am really exhausted. I am writing these things on my blog, so I do not forget these happenings (+posterity) and to inform those who are unaware.

This period is really stressful. If you have any mental health challenges and you want to talk to anybody, do not hesitate to reach out to a mental health support group like @MentallyawareNG or @asidofoundation on Twitter.

If you are hypertensive or want to know more about hypertension drugs, you must read this article

About Your High Blood Pressure Medication